Last week , letter was dated 04 May , not surprised as BOI only with all other lenders have had to be pushed to make any concessions re his issue , I understand they are back in again to finance committee soon so I'm sure our case will be put to them again
N

Hi I have not posted before but am also in this cohort. I don’t have formal confirmation like TMH2017 but after reading this thread I am not hopeful. I first queried this with BOI in 2011 but have never had any joy with them. I would be interested in forming part of a group.
S

All - Update:
Received a letter on Monday of this week confirming that I am not in-scope and that my complaint has been closed. And if I "am unhappy" with the result to speak to the FSO. Disappointed to say the least but following the Central Bank position taken at the Oireachtas Finance Committee meeting last week I am not surprised. Basically and without going into detail, the letter states "As set out in the Insite notice of 22nd December 2006, staff trackers would continue only in two exceptional circumstances: (1) where the staff customer was on a tracker; and (2) where the staff customer was on a fixed rate rolling to a tracker rate, because the terms and conditions of the customers offer letter committed the Bank to this"

Not sure where to go from here. Is it worth continuing the fight, and if so, engaging with Padraig Kissane and the FSO? I have held off on both waiting to see what the response from the Bank would be.

Is there enough ground swell here in this group or among a wider cohort of affected staff to push on with the argument?

For me they are basing their argument on a legal point and some selected communications, however the issue is that staff were misled by BOIMB which impacted their decision making and stopped them moving to a tracker product. Communications from BOIMB in Summer 2008 indicated that all staff would be rolling from the 2yr fixed to a tracker, they later changed their position on this but at that stage there was no longer an option for staff to switch to a tracker.
Fact also remains that the interest rate product details were clearly amended on 10th November 2008 on the Mortgage System in the middle of a 2yr fixed period.

thanks for the update , agree with your view (used very selective parts of communication to suit their argument and anything else was an "error" in my letter back) and this goes against BOI CEO comments to Finance committee considering that customers switch mortgage frequently (this cohort never did because we believed along with other 1800 staff that we would roll to tracker) and giving customers the bounce of the ball in such circumstances (as they have done with other 1800 staff),

Am interested in the 22 Dec 2006 Insite notice - did this specifically relate to the 2 year fixed rate staff product ? Do you have a copy of this ?
S

Your only hope here is that there is a breach of the consumer protection code, I not convinced that the FSO is the right approach, in the past they have relied heavily on whats in the contract.
My opinion is that Bank of Ireland have form in this area.

I think you all need to come together as a group and seek legal advice, Bank of Ireland will easily run you out of money if you go this alone.
M 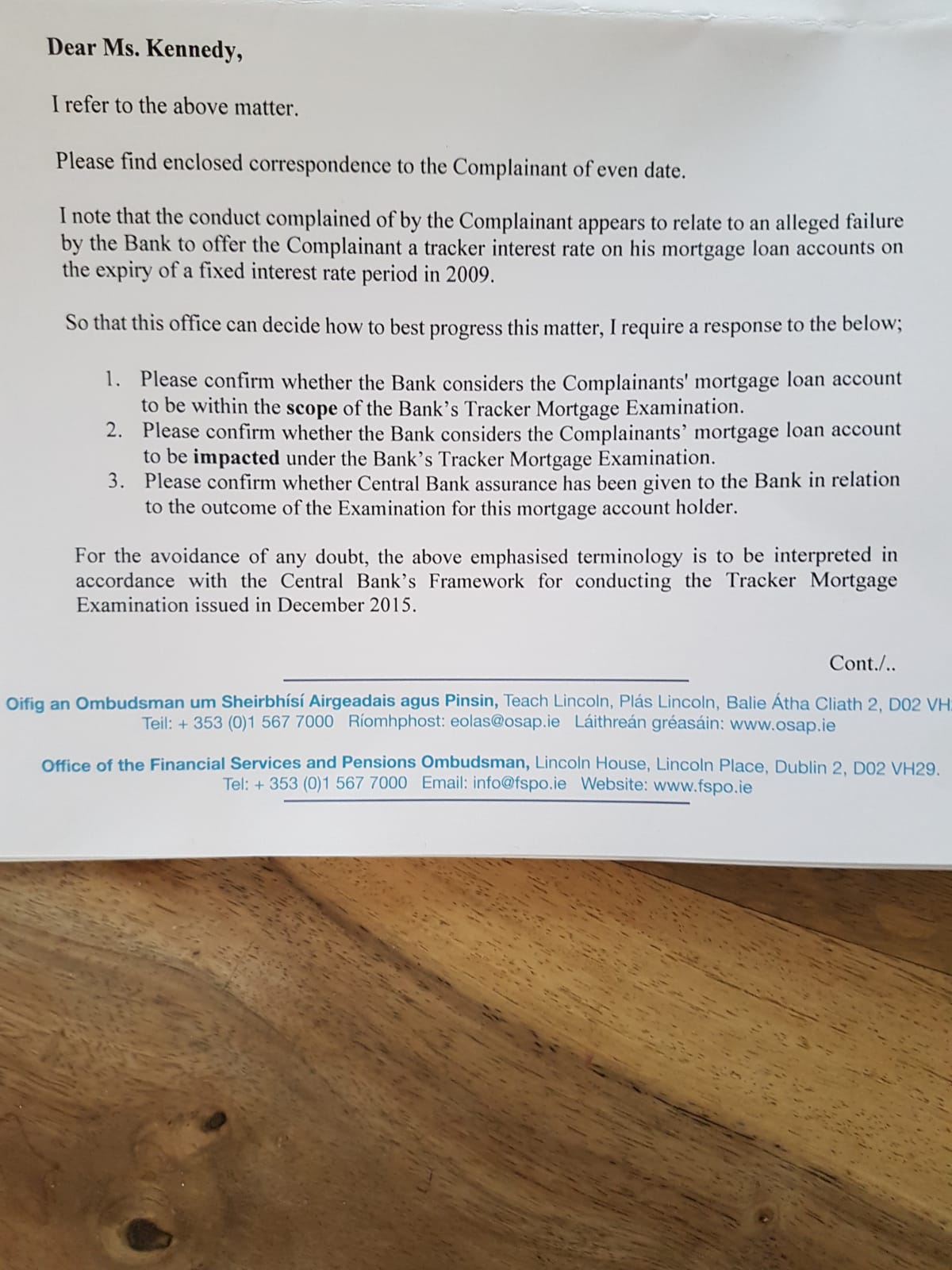 This is what was sent to me from the FSO.
T

is this from an initial request to FSO on this issue ?
T

I submitted a complaint to BOI which was rejected and then went to the FSO. From the wording of the letter, it seems the FSO just wants confirmation from the bank whether I am or am not in scope for the mortgage project.

It does not seem that the FSO are going to review any of my paperwork or what the bank posted on insite where they stated that trackers would be offered. It seems very unusual for me that the FSO are just going to take the banks word that they are right without a full investigation.
T

From my reading of it, it looks like the FSO just wants to determine the current situation, once they have confirmed that the central bank review is over for your account then they will look at your complaint in full.

I think you should some advice on this, the FSO may not be the right route.
R

Hi all. Got our official "you're not included" today. It makes no reference to the insite communication whatsoever. Focuses very much on the legality of the mortgage docs, with no acknowledgement of the expectations raised in that notice. Don't know where to take this next??? If indeed there is anywhere??? The CB is not progressing it; we had already taken it to the Ombudsman and they had not adjudicated in our favour and will not look at it again. We could go to Padraig Kissane, but other than to those 2 bodies, to whom can he appeal it? I think the only other tack could be to focus on the fact that we were actually all set to roll to trackers on the system and that some of us saw that. I know some people here said that they had seen that on their account?
T

@Rossie there was a Product Switch on my account on 10/11/2008 for which I did not sign any MFA/documentation for - This was BOI switching product type from fixed roll to tracker to fixed roll to variable - I have a print out of this.
Did the FSO say categorically they will not look at your case again - I thought they may look at cases again given that all their previous decisions were very bank friendly ?
T

All - I am trying to gauge interest in forming a group to take this forward given current situation. If interested can you confirm the following to the above email address:
- that you were on the staff 2 year fixed & have not received redress from BOI
- whether you have gone to FSO as yet
- confirm whether you are current or ex staff

Yes. It was taking BOI so long to tell us if we were in scope of the current investigation that I complained about that to the FSO. I referenced our earlier (unsuccessful) case in that letter and as part of their response they stated that they would not reconsider our case as it had already been adjudicated on by them. But that shouldn't stop others who have not yet complained?

Re your questions, yes we were on the fixed rate; yes we went to the FSO; and yes, current staff. I would take it further but I think we'd need a new strategy and that's why I'm interested in the screenshots you mention above, and I recall others mentioning they knew some people in the same boat who actually did get redress i.e. were treated differently. This is information that key decision makers may not have had the benefit of considering. But I have no evidence of either.

The CB has said no: the FSO has said no (to us at least); and there's no point in going to law on the docs alone.
T

Rossie said:
Yes. It was taking BOI so long to tell us if we were in scope of the current investigation that I complained about that to the FSO. I referenced our earlier (unsuccessful) case in that letter and as part of their response they stated that they would not reconsider our case as it had already been adjudicated on by them. But that shouldn't stop others who have not yet complained?

Re your questions, yes we were on the fixed rate; yes we went to the FSO; and yes, current staff. I would take it further but I think we'd need a new strategy and that's why I'm interested in the screenshots you mention above, and I recall others mentioning they knew some people in the same boat who actually did get redress i.e. were treated differently. This is information that key decision makers may not have had the benefit of considering. But I have no evidence of either.

The CB has said no: the FSO has said no (to us at least); and there's no point in going to law on the docs alone.
Click to expand...

Rossie I think your in a very unfair situation.

In previous years the FSO relied too heavily on the contract, and did not take breaches of the consumer protection code seriously enough.
I assume you went to the FSO yourself without any professional help, in my view this is the major downfall for so many.

I think there is something we need to push for.

Pearse Doherty from Sinn Féin got the 6 year limitation period on taking a complaint to the FSO lifted.

If he can do that surely we can pressure the government to make similar changes to help consumers who have already taken a case to the FSO in relation to a tracker in previous years, to allow them to appeal the banks findings.

Because when you think about it, why would a bank ever find a customer impacted if the FSO has already adjudicated, they know that the consumer has no more cards left to play, hence saving themselves thousands.
S

TMH2017 - happy to sign up to the email, will send you separate email to the account now. In response to your questions, Yes, No and Current.

All - I believe that the Bank are due back in front of the Finance Committee in the next couple of weeks and that Pearse Doherty is aware of an ex BoI staff member who is in the exact same situation as us here (this ex staff member has provided all of the documentation to him and from what I understand has all the emails, communications etc.). I am going to email Pearse and outline that I am in the same position and that there is a cohort of similar current/ex staff in the same boat. I do think that it would be useful if more of us on here do likewise and email him to show that there is a group of us.
T

Agree this would be bizarre that the FSO could find in your favour with new evidence (i.e. the screen shots of account being moved) & a more consumer protection ethos and those who have previously went to FSO (& got a no) would be prevented from seeking/achieving redress with the exact same circumstances - agree this point needs to be publicised more
R

Thanks all, for your replies. I will write to Pearse Doherty and cc all of our elected reps at the same time. I'm glad to hear that the relevant screenshots are bring shared with the FSO. It all goes to supporting that expectation that was raised. Does anyone know how many of us there are??? Is it 1,800?
T

my understanding is that total amount of staff/ex staff that were on the 2 year fixed was c. 1850/2000 and those deemed not impacted is a smaller subset of that number - maybe fewer than 200
You must log in or register to reply here.
Share:
Reddit Pinterest Tumblr WhatsApp Email Link
Top