Press release from BOI in 2006 stated that all new business fixed rates rolled to a tracker (can't post link yet). Am getting a copy of our Mortgage Offer to check this to be the case.

We started on 1 year fixed and then moved to 2 year staff fixed rate and then tracker was removed as an option. According to John O'Beirne I should refer back to my original letter of offer and not any interim MFA document. On this basis, I expect our default rate to have been a tracker rate.

Are you saying that the following are ambiguous?

"those rolling to ECB +.75% as per their original signed mortgage"

Again, it's as per their "original signed mortgage agreement"

With the benefit of hindsight, I would have written them differently.

"Staff trackers are not available except for the following two exceptions:
Those who are currently on trackers will keep them.
Those who are entitled to roll onto trackers per their mortgage contract will do so."

Appreciate the wording above is clear and it all depends on the original mortgage agreement. BOI's terminology used in the past does create expectations though for mortgage holders that all fixed rates rolled to trackers.

Press release in Feb 2006 - - announcing changes in rates uses tables stating fixed rates for durations 1 year to 5 years (both new and existing) roll to a tracker rate. Again, there is no mention of the fixed rate that rolls to anything else. This is in line with the general view at the time (and expressed by others here) that fixed rates roll to a tracker. Unfortunately, people may not have gone to their mortgage docs to double check the validity of these statements.
Last edited by a moderator: 2 Feb 2018

Hi numbers, I presume that this is the bit you are referring to: 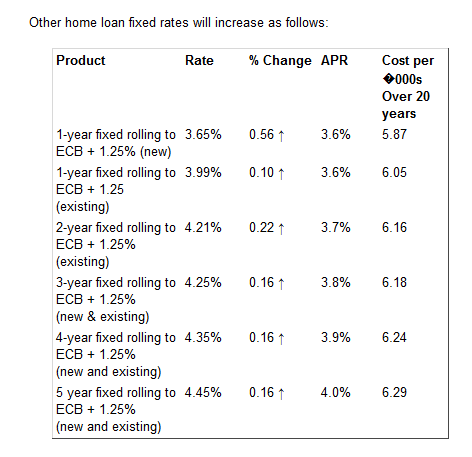 This suggests to me that new customers can avail of a fixed rate for one year of 3.65% rolling to 1.25%

If you had fixed after February 2006, based on this ad, then you certainly would have a claim.

If you had fixed before February 2006, you couldn't rely on this.

So did you rely on this press release?

I think you guys should get together and argue your case with the Central Bank.

I think, as @Pewter & others have articulated, all communication/convention/expectation/internal systems had everyone on the 2 year fixed product rolling to ECB + 0.75%. There was no distinction between groups (i.e. you were or were not on a tracker previously) either communicated by BOI or understood by anyone on the product up to Oct 08 (i.e. we will roll to tracker automatically) or in Nov 08 (i.e. we will not roll to tracker).

When I read the "original singed mortgage agreement" wording at the time I certainly didn't read into it that this meant that BOI was distinguishing between groups - indeed a few days later I wanted confirmation of what rate I would roll to and received confirmation by email from mortgages that my mortgage would roll to the Staff tracker - furthermore the internal system continued to have me and others in the cohort rolling to the staff tracker - this proves (in my mind) that the Bank hadn't made any distinction on the group at that stage so for them to retrospectively say that this was their intention in Oct 08 is false in my mind.

@Brendan Burgess , your points on the MFA are correct in that this doesn't give us a strict legal right to a tracker, just that this is an option (i.e. "IF") but this was the same MFA that all those who have received their tracker have signed so this has been put aside to a degree in the discussion given other stronger arguments.
Regarding the "original signed mortgage agreement" point (if you look past my argument above) and how this applies to those who have got their trackers back (i.e. those who would have been on a tracker at any point in their mortgage)

anyway as we are outside the strict legal sphere, we are in the realm of opinions but I think everyone in this cohort should continue to put pressure on the bank, the finance committee (who have done a great job on this so far) & sign up with padraic kissane so we can get a resolution to this as soon as possible

If you have that, then I would think that the Ombudsman will uphold a complaint from you.

But without that, it would be tougher. But this Central Bank review is producing peculiar outcomes, so one never knows.

In case it's of any help, here is what, ICS, the broker arm sent to the brokers at the time.

TMH2017 said:
the email was an "error" and MFA didn't legally entitle me to the staff tracker
Click to expand...

Did you make a decision based on the error?

In other words, if they had told you that you had no entitlement to a tracker, would you have broken out of the fixed rate and opted for a tracker product? I think that allowance must be made for mistakes, but if you acted on the mistaken information, then I think you have a case.

TMH2017 said:
was @ the FSO back in 13/14 but they ruled (unsurprisingly) in favour of the Bank agreeing with the banks view that the email was an "error" and MFA didn't legally entitle me to the staff tracker despite all other evidence - anyway lets see how this plays out
Click to expand...

This will be interesting, my view is that you have a very good case based on breaches of the CPC.

Its likely that the central bank won't be able to move them on this, given that they haven't budged so far.
Given that you've already been to the FSO, I'm sure that BOI will see the previous decision as legally binding, will you be able to go again to the FSO with the same case?
T

@Brendan Burgess looking at the specific period from 08/10/08 (when notification came out and I got the email a few days later) to 04/11/08 (when the bank changed its mind) I had a clear & definitive view that I would roll to a tracker, there was no decision per se to be made as trackers were not available from 09/10/08, anyway I always expected to roll to a tracker given reasons stated earlier & never made a decision to switch to one because the expectation was that we would all roll to one (& backed up be internal system/convention/expectation etc.), communication in Oct 08 just copper-fastened that
- anyway I don't think it was an error - I am 100% of the view that it was the Banks expectation that all on the 2 year fixed would roll to the staff tracker on the 08/10/08, they only changed the internal system post the 4/11/08 communication not before this

@todo I haven't looked into to this but would think that a route to the FSO is not open to me given I have been there before (& didn't pursue it in Courts) , is interesting q as CB review is overturning large number of FSO decisions so should render all decisions made by them in that period as suspect ?

I think that Ger Deering is saying that BoI's decision today not to give you a tracker is a new decision and you can complain about it to him.

The only way to know for sure is to make a complaint.

FWIW - the press release in early May 2008 (from BOI website) is explicit that all fixed rates (new and existing) rolled to a Variable Rate afterwards:

Interestingly, they don't show any press releases from before 2008. So it seems like there was a change of approach between 2006 and 2008 when they realised the trackers were moving against them. The key point for most staff is the fixing for 2 years in 2007.

What BOI are now (as of today) saying though is that:
Francesca: Where there is doubt, we give the benefit of the doubt to the customer.
T

I believe Padraic Kissane is meeting with the Central Bank on this and is raising this issue so hopefully this can move the dial on this - I would have separately (along with others) sent details on the issue to the Central Bank, the more people who can sign up with PK the better to get this issue resolved - I believe there are c. 150 on us left
T

Understand that despite BOI's shift to a "customer centric" approach and giving the customer the benefit of the doubt etc. etc. BOI are still pushing back on issue above, will be interesting to see what central bank report later this month says , hopefully they don't just give up on this issue (or the c. 5k of cases outstanding per PK), would be interested to see how many people are within this cohort ??
R

Hi TMH. I don't know how many; hopefully not too many. We are part of the BOI staff cohort. We have tried to find out if we are in scope but they can't say until sometime later in 2018. We've gone to the FSO to say this is too long. They did not support our case before. We are hoping that they'll at least bring some pressure to bear such that we get a quicker answer. Though I'd rather a slow yes than a quick no. Nothing to do now but wait?
S

All. My first time posting on this thread. Likewise to you all, I am in the same cohort and similar to Rossie above, have consistently been told that they cannot say if I am in scope or not. I wrote to them in September 2016 and from time to time received a letter back saying the review was ongoing etc. When the major announcement came in January I followed up again with a call and was directed to a call centre in Kilkenny (although the tracker review is being run out of Tralee as I understood). Was informed then that there was no number to contact the Tralee centre but to send an email which I did. Had a letter out within 3 days saying my case was still under review and a further update would be provided in due course. Two of my colleagues were in the exact same boat as me (based on reviewing their docs against mine and as outlined in this thread by many) and they both received redress / returned to tracker (in one instance as the other's mortgage was repaid) rate etc. in December 2017 and January 2018. So I remain hopeful but each day without anything concrete on whether it will be a yes or no saps a bit of the hope. Still as per Rossie, I'd rather a slow yes than a quick no.
T

agree that not knowing is a killer - I understand BOI and central bank are scheduled to be back in front of the finance committee in May (could be overshadowed/moved by referendum) so important we keep pressure on - committee are well aware of the issue , @Strandski10 I have heard that anecdotally too that people with similar mortgage history's have got redress , just to confirm are these people who never had a tracker (and not mentioned in original mortgage documentation) i.e. were on different products prior to the 2 year staff fixed product and then were denied the tracker when they rolled off the 2 year staff fixed ?
S

yes very frustrating that others are getting redress for similar cases with zero transparency from BOI on this and no commitment on timing for a decision - its the hope that kills you !!