"My shares have fallen 30% what should I do?" "Is this a good time to invest in the stock market?"

Investadvice said:
Outside of WWII, none of these crises were both demand and supply side.
Click to expand...

Forgive my ignorance, but what exactly does this post mean? Or more, what are you trying to say?

I can fully understand the sentence in the context of oil prices, but in terms of the overall stock market conversation, I'm at a loss.
R

JSnowWinterfell said:
my gut feeling is that until we see the cases in the US stop increasing the markets will not calm.
Click to expand...

The market reaction so far is just emotional, and will continue to be until the spread is under control in the US.

Rational analysis of the medium term economic impact will not reach the markets for some time.

Markets are not down now because investors have made careful calculations about future economic prospects, they are down because trades are scared.

Are traders as scared now as they are going to be in a week, in a month, in two months.
J

Investadvice said:
What did regulators say pre 2008?
Click to expand...

A bit late - the poster had already clarified what they meant.

Is this the case? I'm not so sure. Ample credit, liquidity, factors of production etc. There will be causalities but a supply side problem?
R

Itchy said:
Is this the case?
Click to expand...

When did the truth start to matter?...
J

RedOnion said:
Yes, but even if you invested exclusively in European stocks, you're still up. Significantly.

Yes but the point is that the european indices were never the rip roaring bull markets, they chugged along , the performance was nothing like the 1990s or even the period from 2002 to 2008, I mean look at the ftse now back at late 1990s levels.
in any case if as some people are suggesting that there could be a meltdown because the central banks created too much money it wont be restricted to the stock markets sure most of those new dollars are invested in the debt markets not in the stock markets, the total size of the global debt markets dwarfs the global stock marklets
R

joe sod said:
Yes but the point is
Click to expand...

You're still talking about price, not total return. I'll help you along and point you to an article to read: 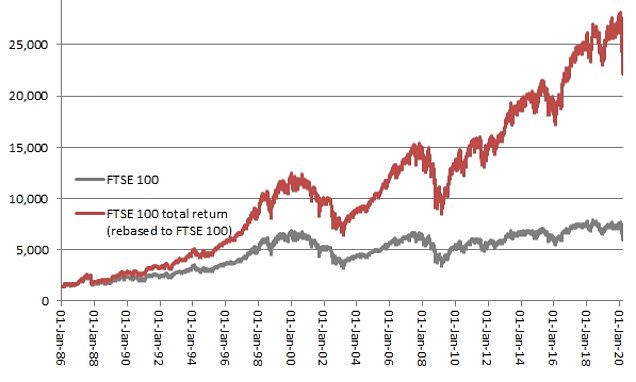 The FTSE 100 has gone nowhere in 20 years, so why are investors told to think long-term? That is the question those of us who advocate investing deserve to face.

Please re-read the context of my post, which you "corrected" me on.

I know you'll make the same point again, but at least make it in the right context, with the right facts.
J

A bit of context, the S&P500 closed down 12% today, the 3rd largest drop in history surpassing the daily losses seen during the financial crisis. The FEDs monetary policy is not working, and we have yet to see the wider impact.

We are in unchartered territory.
L

The market wants a gigantic fiscal response by governments. Monetry policy won't do it
T

I’m comfortable with losses. I’m not comfortable on missing out on the price cuts but each time you drop in can take an immediate 10% haircut right now
S

This was retweeted by our ex, Marc on Twitter

What has happened 1 3 5 years after large monthly falls.

Spoiler it goes up.
N

Itchy said:
Is this the case? I'm not so sure. Ample credit, liquidity, factors of production etc. There will be causalities but a supply side problem?
Click to expand...

Large sectors of the economy are forcibly shut. Most of them will re-open when this passes, but some won't.

Also, workers that would have been hired won't be hired, and not all laid-off workers will be taken back on again.

This will have a supply-side impact.
J

RedOnion said:
I know you'll make the same point again, but at least make it in the right context, with the right facts.
Click to expand...

Yes I read that link you posted its good and I agree with it, but it makes the point that yes if you had stuck with the ftse through all the turmoil of the last 20 years you would be still in positive territory (but you could make the same point about bonds or bank deposits), but the main point the article was making was that you should have been diversified globally to get the outsized returns so exposure to the US market was a must.
My point is which you are deliberately choosing to ignore is that the only market that delivered those outsize returns was the US market, therefore that was the only market actually that was a bull market. Of course the ftse and european are getting sold off like everything else and maybe it is just that they remain perennial laggards.
Even when I made this very point before in the thread "longest bull market in history" I was shot down because the bull market that was being discussed was the US not european or global markets. Therefore the implication was that the US was "the longest bull market in history"
Last edited: 17 Mar 2020
S

Every bear market is 'different' and 'unexpected'
If it wasn't unexpected, it wouldn't have happened. World wars, recessions, Y2K... they all pass
D

Total Return Index - what about taxes and costs?
J

lareprise said:
The market wants a gigantic fiscal response by governments. Monetry policy won't do it
Click to expand...

JSnowWinterfell said:
What happens if the central bank goes bust?
Click to expand...

how can a central bank go bust, sure they print currency out of nothing, you mean what happens if they lose credibility? germany 1920s or Venezuela now you mean. Surely in that scenario are you not better off sticking with the stock market at least you still own an asset
J