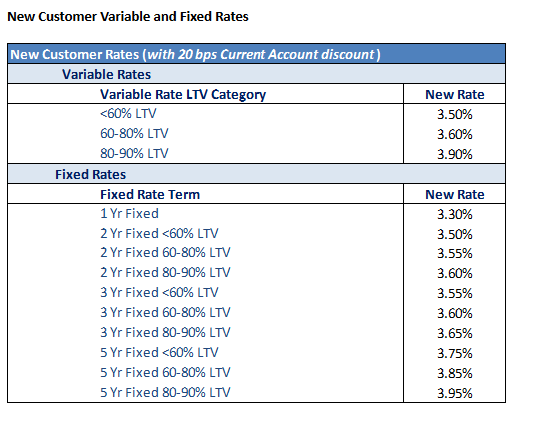 Existing KBC mortgage customers on variable rates, regardless of their loan to value, can now choose from a suite of competitive new 2, 3 and 5 year fixed rate options. This follows a move in February by the Bank tooffer a 0.20% lifetime discount on all mortgage rates to existing customers who hold a Current Account with the Bank.

Additionally, customers switching their mortgage to KBC can avail of an increased cash contribution of €2,000 (up from €1,000) for completions to December 2015.


First Time Buyers, Movers and Switchers can also avail of 50% off KBC Home Insurance in year one - this could be worth a saving of €150.

All rates after 0.2% discount for having a current account with KBC

The best rate an existing customer can get is 3.9% if they are prepared to fix for two years and have an LTV of less than 60%.

A new customer can get rate of 3.3% by fixing for one year which is the lowest on the market.

Wondering if KBC allow you to overpay if you have a fixed rate. If not then nothing in this for me. Soon as I am out of negative equity I am leaving this shower as there are one of the worst in the market for fleecing their existing customers.
P

All rates after 0.2% discount for having a current account with KBC

The best rate an existing customer can get is 3.9% if they are prepared to fix for two years and have an LTV of less than 60%.

HI Brendan, are you sure existing customers need to satisfy the LTV clause? It says "Existing KBC mortgage customers on variable rates, regardless of their loan to value, can now choose from a suite of competitive new 2, 3 and 5 year fixed rate options"??
Last edited: 29 Jun 2015

Brendan Burgess said:
A new customer can get rate of 3.3%
Click to expand...

Is your source for this
https://www.kbc.ie/News-and-Press/Latest-News-and-Press-Releases/KBC-Bank-enhances-mortgage-offering-for-New-and-Ex

My source was a press release by email, but it's the same content.

It could suggest this. But it could also be regarded by them as a teaser rate to get new business. Effectively a discount for new customers.

Yet another anemic and sly move by one of the main mortgage providers.
Noonan has been made look awful in this whole debacle.
He all but guaranteed hundreds of thousands of mortgage holders a material reduction in their appallingly high variable rates.
He has failed miserably to date and they have all but laughed in his face.
Will he have the guts to really put manners on them?

The Central Bank's "sorry, nothing to do with us" stance is also depressingly weak.

Astonished this isn't a much bigger issue.
K

All lenders are still arguably gouging customers on most or all rates!
K

KBC, bailed out in its own country, is charging 2.37% on variable mortgages there, and presumably managing to pay handsome banker salaries and bonuses too, compared with the penal 4.3%* imposed on Irish borrowers who are governed by the same European central bank (see screenshot of simulator).

In other words, these fine Belgian chaps and our fellow-Europeans are charging us a premium on the price of money of more than 81%, for the privilege of being Irish.

(*I have a feeling that rate is understated in my case, and so perhaps for many others...)

Please do not tell me that this order of difference across two entire markets is accounted for by lack of repossessions, or that 'competition in the free market' will solve it.

You can research for your own circumstances using the simulator found here --https://www.kbc.be/PBL/CC028/Private_individuals/Borrowing/Borrowing_for_your_home/Home_Loan/Home_Loan_-_Details I thought it was particularly mean and cynical of them to not offer the 1 year fixed rate option to existing customers.
G

It now looks like KBC are doing the pulling the same stunt as BOI and others and offering the SVR rates to new customers only.

I have recently moved from BOI to KBC on 3.55%. If I waited 3 more months I could have been given an extra 1,000 euro (which is fair enough) but also a different rate. However more importantly I would also be aware that I would not benefit from changes to the SVR rate

Surely there has to be the basis of a legal case here somewhere. In the meantime, I am guessing its back to the politicians again to see if proper pressure can be applied to the banks on this. I think it has to be against consumer law in some way.
M

mickoneill30 said:
What's worse is I think your 3.55% is introductory.
Click to expand...

I checked the details of the loan offer and I have seen nothing to indicate it is introductory. As it is an SVR they do reserve the right to raise it, but nothing that it is an introductory offer for a defined period of time

Let me rephrase re the "not benefit from changes in the SVR rate" comment:
When I signed up to BOI, I was on the standard SVR rate - which had some code listed against it (would need to look it up to get the correct detail. I always knew this was their standard SVR. A 80% LTV SVR came out, but as I had not signed up to this I did not quality automatically. I assumed I would have to apply for this to get it. Same applies for the 60% LTV in January of 3.9%. The fact they did not allow me to move was another matter.
With KBC I signed up to their "special" <60% LTV SVR product with a rate of 3.55%. The new product they are selling to new customers is the exact same <60% SVR product; it just has a different price to the existing one. If it had been a new <59% SVR product, it may be a slightly different scenario as you are purchasing something different. But I am now effectively paying a different price for the exact same product.
If the product had been a special "0.95% off" the SVR rate, and the new product was a special "1% off" the SVR rate, again it would be different


I was on to KBC this morning and did relay my disappointment to them about this practice. I told them I had moved to them in good faith, and they have not shown me the same good faith in return. I advised them the only action I have available to me in the short term is to move all my savings accounts from them as they mature. I also advised if any further rate drops are not passed on, I would be closing my credit card account with them also. I know it will make little difference in the grand scheme of things, but at least I am not rewarding their 'poor behaviour' towards me.

I will add that although I am only 2 months into a switch, and obviously would not switch for 0.05%, if the margin gets bigger and a better offer comes onto the market, I will happily consider moving again. I did point out that the customers they have acquired via switching over the last while are those who do not suffer from inertia and are in a position to switch, so may not be the best policy to target these customers if they wish to maintain them.
S

I think i'll switch again. To either ulster bank or back to boi. I can now get 3.6% fixed with boi or 3.3% fixed with ulster bank for a <60% LTVmortgage, and both banks give cash payments towards the legal fees.
G

@Subotai
Interesting question posed here - what would the rate have to be to warrant another switch? or how much per month?

Personally I think I would want to make a saying of ~0.25% to consider moving. That said, I do believe interest rates on LTV<50% will go below 3.3% in the next 9 months. Maybe its just my blind optimism, but I do think it will happen. At that stage I would be willing to move again, without doubt.

Personally I am not interested in fixing, as I am currently overpaying the mortgage and want to continue to do so.

If you are using the logic that others are not passing on the existing rate cuts, then surely it warrants a move to Ulster only. BOI are unlikely to offer any future cuts to existing mortgage holders based on past performance.
S

In my case, i think switching to either ulster bank or boi is an option. The rates are better, and the cash payments they give out more than cover the legal fees.

I don't really mind fixing for a few years.
So i'll have to work it all out. I think I'll probably go with ulster, as they seem to treat their existing customers better than boi do.
You must log in or register to reply here.
Share:
Reddit Pinterest Tumblr WhatsApp Email Link
Top