How many tracker cases in each bank

I have compiled this table from the banks' submissions to the Oireachtas Finance Committee and updated it based on an article by Joe Brennan in the Irish Times. 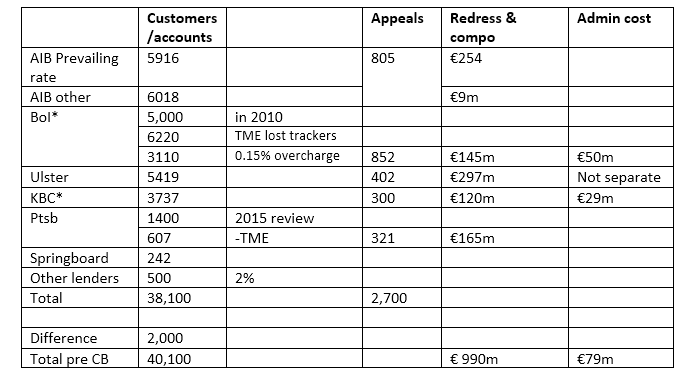 How much will it cost the banks in total?

These are the appeals as at 31 March 2019. The Central Bank figures are probably more up to date. A lot more appeals have been submitted in recent months as the 12 month deadline approaches.
S

@Brendan Burgess as per Finance Committee discussion on 9th May 2019.

The €120 million has been paid out to 31 March. There have been some more payouts since then. I have explained before that, out of €297 million, there is roughly a 50:50 split between the costs of the examination from our side and the customer compensation and remediation. One can take from this that there is still an element of around €20 million or €30 million odd still to paid out from 31 March. That is a combination of some customers we have got to since that date and the 190 customers who, to date, we have been unable to contact. We have highlighted that in the response also.

So the operational cost to the bank has been about €150 million.

It is roughly 50:50. Those are largely the splits that exist. We have not taken any significant estimates of provisions in terms of fines at this point.
M

Those tables are good

But would it also be useful to have a table of the disputed cases?

Charlie Weston had it during the week
B

How much will it cost the banks in total?

Does the bank pay, or is it the taxpayer? Or is it bank customers.

moneymakeover said:
But would it also be useful to have a table of the disputed cases?
Click to expand...

Great idea. I had not seen that article,

An interesting article by Charlie Weston here : https://www.independent.ie/business/personal-finance/property-mortgages/tracker-mortgage-scandal-brazen-banks-refuse-to-own-up-to-10000-cases-38320338.html And the list of unrsesolved issues Cases where the banks are refusing to admit there...
www.askaboutmoney.com

SaySomething said:
out of €297 million, there is roughly a 50:50 split between the costs of the examination from our side and the customer compensation and remediation.
Click to expand...

I will update the table accordingly.