The Central Bank report said that 99 people lost their family homes as a result of losing their tracker.

I have not seen any such cases and find it very hard to imagine how it could have happened. It's possible, but one has to make a huge number of assumptions.

Over the last 10 years, about 10,000 have lost ownership of their home. The main reason these people lost their homes was because their income dropped as a result of losing their job. Some just handed back the keys because they were in deep negative equity and didn't want the hassle of the house or the mortgage anymore.

But let's look at a typical borrower who wanted to stay in their house and did what they could to keep it.

They took out a €300k mortgage with ptsb in 2006 and fixed for three years, after which they should have been given a tracker at ECB + 0.8%. ( I choose ptsb because they had the biggest gap between the SVR and tracker rates and because they increased their SVR long before any other bank. At one stage, they were charging 6.25% SVR when AIB was charging 3%.)

Here are the relevant rates 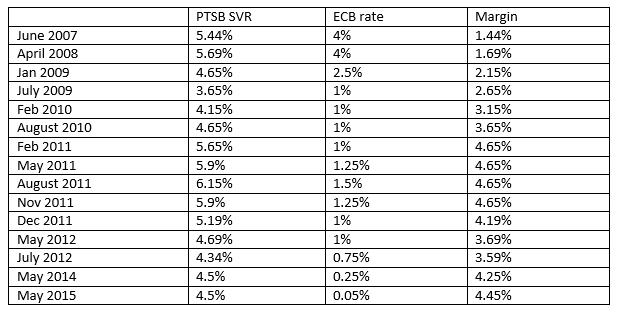 This borrower was only able to pay €1,300 when the repayment was €1,900. After 6 months, his arrears would have been €8,000. The lender would have issued proceedings to possess the house and a year later he would have been out on the street.

If they had been on a tracker, they would have not even been in arrears.

If this had been the banking culture at the time, we would have had hundreds, maybe even thousands, of borrowers who lost their home wrongly.

But Irish lenders were very generous with their restructurings.

So what sort of a restructuring would they have got.

PTSB split mortgages very easily. I have assumed in this case that ptsb would have warehoused €100,000. In other words, no interest charged and no repayments on the €100,000.

So actually, the repayments would be the same as they would have paid on a tracker.

So, if this borrower could afford €850 per month, and if they had been on a tracker, ptsb would have split 1/3rd of the mortgage and reduced their repayments to €850 a month.

So to argue that someone lost their home because they lost their tracker, you have to make all the following assumptions:
1) They wanted to keep their home
2) They engaged with their lender
3) They paid what they could
4) The bank forced them to give up their home
5) If they had a tracker, the lender would have given them a very generous restructuring to make the mortgage sustainable.

So ptsb is being penalised for doing generous restructurings. That is not right.

You may be tying yourself in up in language. BTL or PDH - they are likely still to be family homes, regardless of who is resident in them... Sale of a property would almost always result in the resident/tenant losing their family home.
B

I take issue with this:

But Irish lenders were very generous with their restructurings.

The banks did no favours, the banks had zero choice in the restructurings because of their crazy lending practices.

And what the banks did was restructure while waiting for the bust to end.

Bronte said:
But Irish lenders were very generous with their restructurings.
Click to expand...

You are not denying that they were generous?

You are just saying that their motivation was not kind-heartedness?

In other countries with the same issues, banks just repossessed the houses and everyone moved on.

I don't know how many but I have seen other cases.

Where are you with it? Have you appealed?

This is the issue that most people have - BTL/PDH or not.

They made their financial decisions based upon the information available to them at the time. Their commercial decision to sell a property was made because of an interest rate that should not have been applied to their loan. This has had a knock on effect on their finances.

Decisions on whether to go on holidays, finance a new car, pay for further education, meet the full costs of a loan. Similar issues for PDH loans.

All their decisions were made based upon the information that the bank provided to them. That they were paying a higher interest rate than they should have been.

So a family should be able to reasonably argue that they would have been able to service a considerable portion of their loan if they had been on the correct interest rate then they may not have sold their home.

I have just had a long PM - not sure why he is not posting it here instead.

But he disagrees strongly with my argument that no one lost their home.

He got into arrears. Felt bullied by his lender. I was really shocked at the story and as I was reading it, I assumed that he had lost his house. Then his last line.

I think that this shows some of the thinking behind the "99 people lose their homes due to losing their trackers." It's just not clear thinking.

Of course, if lenders had not restructured mortgages, then people would have lost their homes due to losing their trackers. But the banks did restructure mortgages - 120,000 of them.

This is the precise wording in the CBI report

There is no detail about the methodology used. It could be:
Or indeed the 99/216 could be somewhere in between 1) and 2) as set out above.

If I was a regulator being accused of having not taken this issue seriously I would probably go with the liberal definition of 1) above.

As we can see from the mortgage arrears data, there are thousands of people who have not paid anything at all in half a decade, and it is doubtful if an interest rate of 0% would prompt them to re-start.
T

Brendan Burgess said:
I have just had a long PM - not sure why he is not posting it here instead.
Click to expand...

Quote from beginning of PM "I was about to post this reply in the thread but decided not to as I have a FSPO case about to go tho investigation and decided against posting publicly" thought that explained clearly why I sent you a PM instead of posting details in the thread.

Anyway I thought if you seen it from a point of view of someone who faced a lender that was unwilling to help in anyway you might have a change of opinion. Even though we seem to have completely different opinions at least we had a discussion and I do appreciate your opinion. I honestly believe if there are others who had small arrears as a direct result of a tracker related issue and then faced a lender who acting as ours did and had no real interest in helping it would easily be possible for arrears to get to a level where they were in danger of losing their home. Maybe customers were treated differently depending on whether they were in positive or negative equity

I suppose it's possible that someone is paying the equivalent of a tracker amount on an SVR mortgage and the lenders says "It's not enough, we are going to repossess your home.". And the borrower says "Oh dear, we don't want the hassle of court, so we will just surrender it or voluntarily sell it."

I haven't come across that. I will stress that the banks restructured 120,000 mortgages on family homes. So in cases where someone was paying the equivalent of the tracker amount, they would have got a restructuring easily enough. And if the bank refused, it's very unlikely that the bank would have succeeded in the court.

Brendan Burgess said:
So in cases where someone was paying the equivalent of the tracker amount, they would have got a restructuring easily enough
Click to expand...

do you mean over a long period?
We would have paid roughly the equivalent of a tracker rate but for only for 4 months before going on interest only for 6 months

You did not lose your home or come close to it. So your story is irrelevant to the thread.

Brendan Burgess said:
I have just had a long PM - not sure why he is not posting it here instead.
Click to expand...

I originally sent a PM then you posted this so I put some details in the thread and this is how you reply, seriously?

Brendan Burgess said:
You did not lose your home or come close to it. So your story is irrelevant to the thread.
Click to expand...

I suppose it's possible that someone is paying the equivalent of a tracker amount on an SVR mortgage and the lenders says "It's not enough, we are going to repossess your home.". And the borrower says "Oh dear, we don't want the hassle of court, so we will just surrender it or voluntarily sell it."
Click to expand...

If this, there was probably a lot of positive equity.

NoRegretsCoyote said:
If this, there was probably a lot of positive equity.
Click to expand...

Why would it mean that they have a lot of equity?

And even if they did, what would the relevance be?

NoRegretsCoyote said:
If this, there was probably a lot of positive equity.
Click to expand...

Brendan Burgess said:
Why would it mean that they have a lot of equity?

And even if they did, what would the relevance be?

It would have meant the bank wouldn't have had to take a write-down.

NoRegretsCoyote said:
It would have meant the bank wouldn't have had to take a write-down.
Click to expand...

That wasn't and isn't really a factor in their decision - contrary to public opinion.

BANKS are more likely to repossess houses where it is worth more than the mortgage, homeowners have been warned.

www.independent.ie
Article by Charlie Weston from 2014 seems to indicate otherwise
"BANKS are more likely to repossess houses where it is worth more than the mortgage, homeowners have been warned.
And these people who are in "positive equity" are less likely to be offered a solution to deal with arrears, according to a powerful Dail committee."
Any breakdown of the 99, as to how many from each lender and how many of the 99 were in positive or negative equity?
Is there any general stats that would indicate % of mortgages in positive or negative equity in any given year?

He is quoting the report of an Oireachtas Finance Committee and not any data. (The Committee may have had data - I don't know.)

There has been a dramatic rise in positive equity over the last few years. So based on this theory, you would expect house banks to be launching a tsunami of legal proceedings. But in fact they have fallen dramatically.

The CB studies over the years have shown that, all other things being equal, a house in negative equity is more likely to be in arrears. but I don't think it was a huge difference. This makes sense. If you have positive equity, you are going to try harder to protect it.

But the lenders based their legal proceedings on the payments and engagement and not on the level of negative equity.

Would you be deemed to have lost ownership if you've signed surrender of possession under mortgage to rent prior to lodging an appeal?
You must log in or register to reply here.
Share:
Reddit Pinterest Tumblr WhatsApp Email Link
Top