I went to AIB bank when my fixed rate was up 2010 and spoke to a AIB employee arranged meeting in their office, he didn’t offer me tracker he gave me another fixed rate which was competitive at the time for another 3 years he said he had chose them same rate himself I thought it seemed the best to be fair at the time 3.... something I have mentioned his name in my appeal also.
I also found recently a letter from AIB in Oct 2008 writing they had stopped the tracker for new customers but it was still available to existing customer my name is not on it it just says Dear Customer I should have put it in my appeals pack but I didn’t I found it after

Kevin Daly said:
I also found recently a letter from AIB in Oct 2008 writing they had stopped the tracker for new customers but it was still available to existing customer my name is not on it it just says Dear Customer I should have put it in my appeals pack but I didn’t I found it after
Click to expand...

Could you share a copy of that letter?
K 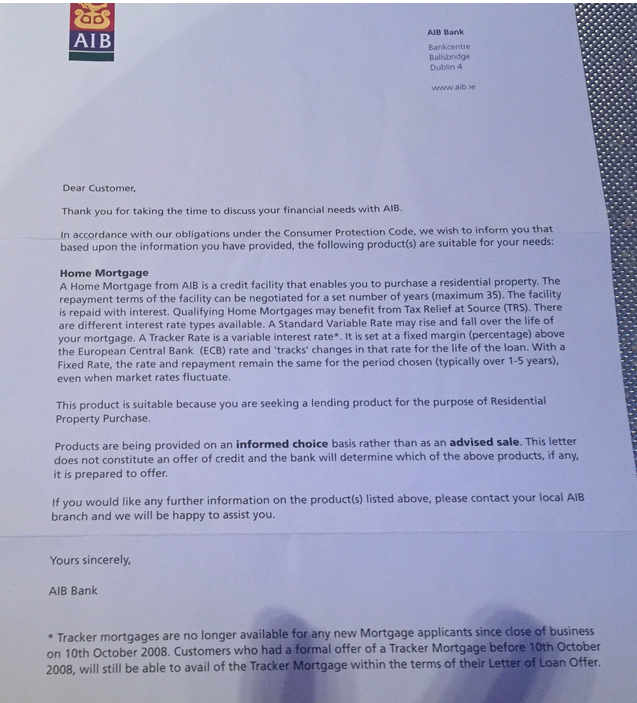 is Kevin Dalys letter not a smoking gun ? It clearly says on the bottom that customers who had the formal offer of a tracker before October 10th 2008 will still be available to avail of the tracker within the terms of the loan offer

This says it in black and white to me , i dont see how AIB have a leg to stand on with this letter . Its very probably we all got this letter but just never kept it - at any rate even one customer with this letter means that everyone else would be entitled to it too

In my case summary and response, AIB say that when we drew down on 4th Jan 2008 we had the option of a tracker as it was still available but we chose the fixed rate instead. So we should 100% have been offered the tracker after the fixed rate (whatever the rate) so its clearly a breach of contract

However, it's useful in that it confirms this .

What is the date of your original loan offer?

What date did you draw down your mortgage?

Hi Brendan
I took out my mortgage May 2008 there is no date on the letter as per sent last week , i did go on interest only around end 2009 for six months so maybe it was around then that they sent that letter out with new arrangements ? I kept all correspondence from AIB since I took out my mortgage and found it after I sent appeal but it does clearly say what’s going on ?

It's very odd. I don't see why they would send you that letter.

i Know I think the group should meet ? And put all out cases forward somewhere central in the country ?
Z

Surely that letter if applies to one then it applies to all. IS this not the golden nugget required to get this over the line in the event of a high court case?
Or am I getting too easily excited about this?
K

Hi all
Received response from AIB after first appeal letter can someone send 2nd response template please I have been out of the loop with this the last few months or should I go direct to ombudsman?
Kevin

There might be little point in responding to this at this stage.

Just tell the Appeals Panel that you have nothing further to add.

They will eventually issue a decision rejecting your appeal.

Then you can go to the Ombudsman.