55% of appeals for further redress upheld or partially upheld

4.2. Appeal Outcomes At 31 May, c. 3,300 customers had appealed to their lenders the original compensation offer they received.15 This represents c. 10 per cent of customers who have received payment. In respect of appeals lodged at end May, c. 1,800 appeal outcomes have been decided upon by Appeals Panels. Of the c. 1,800 appeals decided, 55 per cent have been upheld/partially upheld and 45 per cent have not been upheld. The majority of appeals upheld arise from awards for additional detriment of which the lender may not have been aware at the time of the original redress and compensation awarded. At 31 May 2019, Appeals Panels have awarded c. €7 million additional compensation to affected customers. 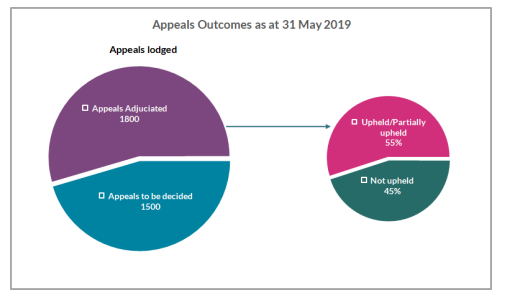 So what category do people who appealed but then the bank made a better offer. They were then asked do they accept and wish to withdraw their claim by the BDO. So technically they were not in the 1000 mentioned above as they still have the right to appeal again within one year.
A

While I have heard of this happening, it wasn’t widespread so won’t affect the overall numbers