From the Ombudsman's review of 2019 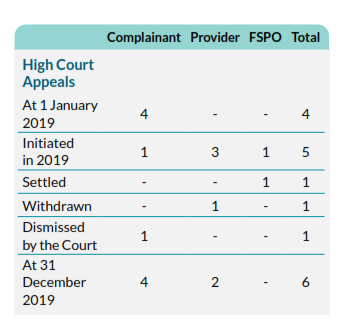 Only 3 cases where challenged by the Providers during the year and one of those was withdrawn.

It would seem obvious that the potential cost of a case noting the adversarial nature that if you lose you potentially pick up the costs of the other side that in reality there are few cases taken by Complainants.

That said, the FSPO still has not outlined that his office is probably obliged to review any case for Unfair Contract Terms Directive.

A number of cases that Mr Kissane was involved with saw the revocation of a decision by FSPO - another first by Mr Kissane who as many of us know has more firsts than Kerry has football all-Ireland titles.

In reality a common problem is that given that people making complaints are essentially not able to structure their case adequately whereas M/s Kissane & Burgess know how to do that.

There are several cases that did go the courts involving PTSB (see PSPO cases) and EBS where it would appear that misleading the Courts however unintentional stretches credibility and could reflect the fact that a legal department is not au-fait with what went on in a case. Just read what Justice Hogan wrote about PTSB. Interestingly Justice Hogan has a preliminary decision on another aspect of UCTD namely that referring to terms in the Letter of Offer when conducting apparently straight forward fixing of an interest rate for a period would have solved Tracker much earlier.

This is why the FSPO should embrace UCTD and I think there is a big struggle with PTSB and the discounted tracker!

WizardDr said:
A number of cases that Mr Kissane was involved with saw the revocation of a decision by FSPO -
Click to expand...

What is a revocation of an FSPO decision?
W

Practically I assume it means they redo the case de novo.

You are either explaining yourself badly, or you do not understand how the Ombudsman works.

1) Each case is considered separately.
2) It is possible that in Case A) the Ombudsman ruled one way and in Case B) The Ombudsman ruled another even though the issue was the same because Padraic Kissane made a better argument in Case B)
3) It is also quite possible that the Ombudsman issued a preliminary decision against Padraic's client and Padraic got the Ombudsman to change the decision before issuing the Legally Binding Decision. The process is confidential so I doubt that Padraic would be able to tell us about this if it happened.
4) There have been cases where the Legally Binding Decisions have been nullified by the High Court. But I don't think that Padraic was involved in any of these.
5) There was one technical case in the High Court last year I think. The Ombudsman's final decision had a typo which was significant. To correct this, the Ombudsman had to go to the High Court to get it changed. Neither the institution nor the complainant objected to this.

6) But what you appear to be suggesting did not happen. The Ombudsman did not issue a legally binding decision and then "redo the case de novo. " because Padraic Kissane (or anyone else) disagreed with it.

I think he was and the FSPO revoked their decision without a Court Order.

You asked a specific question that I answered except it was your subjective opinion of your superiority that you were peddling.

But what do I know about gas cookers?
J

WizardDr said:
I think he was and the FSPO revoked their decision without a Court Order.
Click to expand...

I don’t know much about the Ombudsman processes but I would be extremely surprised if the Ombudsman revoked his final decision without a Court Order, as it would be procedurally unfair on one or other of the parties involved. The original “winning” party would have a grievance and the Ombudsman would leave himself open to a Judicial Review.

Is this Decision referenced anywhere?

I’d say Brendan’s option (3) above is the most likely fit for what you’re referencing.

Brendan Burgess said:
4) There have been cases where the Legally Binding Decisions have been nullified by the High Court. But I don't think that Padraic was involved in any of these.
Click to expand...

There is a sub category of this which happened on one occasion - that I know of.

The Ombudsman heard the case from scratch and rejected the complaint.

But the key point is that the Ombudsman did not revoke his decision unilaterally . He had to agree to BoI's appeal. I am not sure of the mechanism. But I understand that the High Court issued an order.
Last edited: 19 Oct 2020

And just to be clear. None of this takes away from the great work done By Padraic Kissane.

He has probably advised a customer in their appeal of a case to the High Court. And, maybe in such a case, the Ombudsman agreed that Padraic's argument was right and did not contest the borrower's appeal.